How to Deal with People Who Drive You Crazy 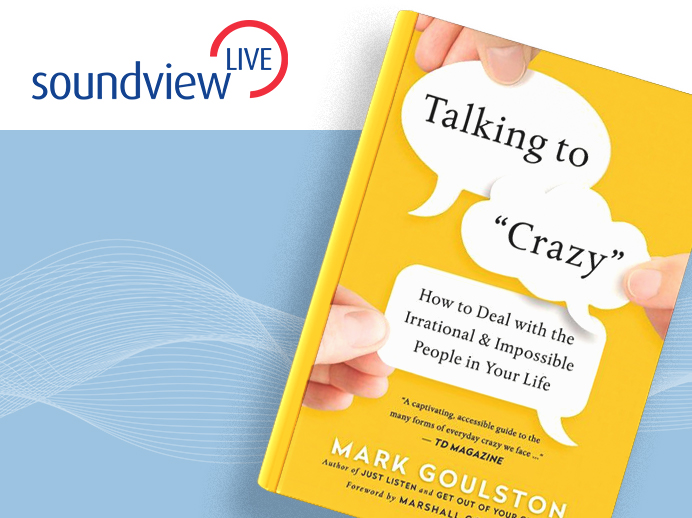 Let’s face it, we all know people who are irrational. No matter how hard you try to reason with them, it never works. So what’s the solution? How do you talk to someone who’s out of control? Dr. Mark Goulston has the knowledge and experience to help you find answers to these questions to ensure a more pleasant work environment.

In this Soundview Live webinar, How to Deal with People Who Drive You Crazy, Dr. Mark Goulston brings his communication magic to the most difficult group of all: the downright irrational. The key to handling irrational people is to learn to lean into the crazy – to empathize with it.

Mark Goulston, M.D., is Chairman and Co-Founder of Heartfelt Leadership, a business psychiatrist, consultant and executive coach renowned for his expertise on getting through to and engaging people in the workplace and beyond.

Trained as clinical psychiatrist, he honed his skills as a hostage negotiation trainer for the FBI. He has worked with an impressive list of organizations, including Accenture, AstraZenica, British Airways, Deutsche Bank, ESPN, Federal Express, GE, Goldman Sachs, Hyatt, IBM, Kodak, Merrill Lynch, and Xerox, as well as Pepperdine University and the UCLA School of Management.

Prominent in the health community along with the business world, he was named one of “America’s Top Psychiatrists” by The Consumers’ Research Council of America in 2011.

Dr. Goulston is the author of the bestselling Just Listen, which has been translated into 14 languages and inspired a PBS special, “Just Listen with Dr. Goulston.” His prior books also include Get Out of Your Own Way and Get Out of Your Own Way at Work. He writes a Tribune syndicated career-advice column, “Solve Anything with Dr. Mark,” and blogs for Fast Company, Huffington Post, and Psychology Today. Sought out for his expertise in the context of business issues and current events, he has been featured in The Wall Street Journal, Harvard Business Review, Fortune, Forbes, Newsweek, Time, The New York Times, and the Los Angeles Times. He has also been interviewed on CNN, Fox News, BBC News, Today, Oprah, NPR, and Oprah Radio. Description: http://www.getrealinfluence.com/tp.gif

Dr. Goulston received his B.A. from UC Berkeley and earned his M.D. from Boston University. Before his career in business, he served as a professor at UCLA’s noted Neuropsychiatric Institute for more than 20 years.

The 4-Step Method to Real Influence

Getting Through to Absolutely Anyone

Be Bold & Win the Sale