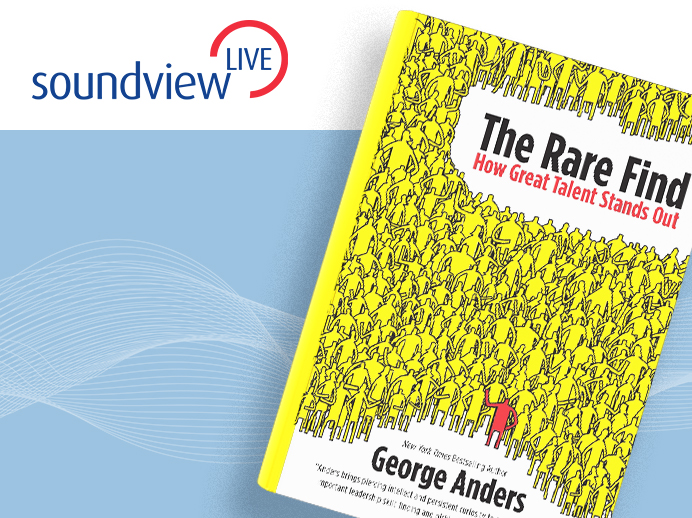 How can we sort out the mysteries of talent? We all wonder how to tell really outstanding prospects from ones who look great on paper but then fail on the job. Or, equally important, how to spot the ones who don’t look so good on paper but might still deliver extraordinary performance.

In this Soundview Live webinar, Spotting Exceptional Talent, George Anders pulls together America’s best new ideas about how to get talent right. Better methods are within reach. Drawing on the best advice of talent masters, Anders delivers powerful ideas that you can apply to your own hiring efforts.

George Anders is a New York Times-bestselling author and a journalist with three decades of experience writing for national publications. He started his career at The Wall Street Journal, where he became a top feature writer specializing in in-depth profiles. He was part of a team that won a Pulitzer Prize in 1997 for national reporting. He also has served as West Coast bureau chief for Fast Company magazine and as a founding member of the Bloomberg View board of editors. His work has appeared in leading publications worldwide, including The New York Times, BusinessWeek, The Guardian and the Harvard Business Review.

George is the author of The Rare Find: Spotting Exceptional Talent Before Anyone Else (2011), as well as three previous nonfiction books. The first, Merchants of Debt: KKR and the Mortgaging of American Business (1992), was chosen as one of the eight best books of the year by BusinessWeek magazine. His second book, Health Against Wealth: HMOs and the Breakdown of Medical Trust (1996) was hailed by the Journal of the American Medical Association as "a must-read." His third book, Perfect Enough: Carly Fiorina and the Reinvention of Hewlett-Packard (2003), was a New York Times bestseller. A graduate of Stanford University, George lives in northern California.

Winning the Global War for Talent

How to Attract and Keep the Best