How Smart Companies Win by Trusting Their People 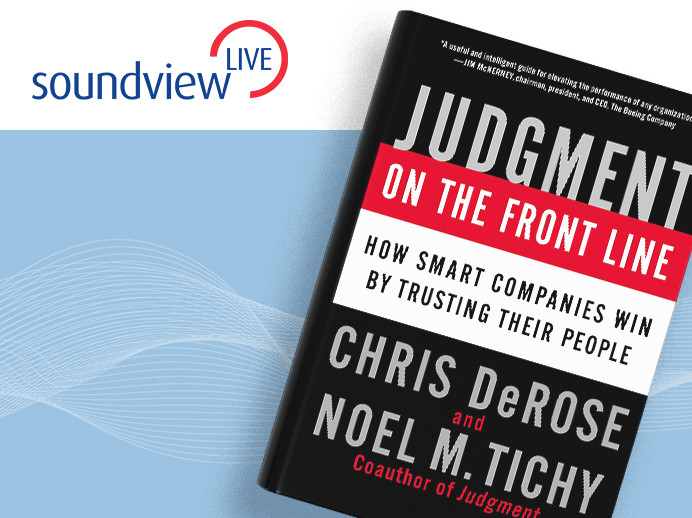 Management experts Chris DeRose and Noel Tichy, authors of Judgment on the Front Line, have spent years partnering with CEOs as they convert their companies into frontline-focused organizations. In this Soundview Live webinar, How Smart Companies Win by Trusting Their People, the authors reveal their five-step process that helps leaders identify how to generate dynamic customer innovation through the people who have direct customer contact.

Dr. Noel M. Tichy is a Professor of Management & Organizations at the Ross School of Business at the University of Michigan, where he is the director of the Global Business Partnership, which for over a decade ran the Global Leadership Program, a 36-company consortium of Japanese, European and North American companies who partnered to develop senior executives and conduct action research on globalization in China, India, Russia and Brazil.  He is now partnered with the Boys & Girls Clubs of America to build a world class capability for leadership development. Professor Tichy also conducts the LEADERSHIP JUDGMENT PROGRAM executive workshop at the University of Michigan.  Most recently, he led the launch of the Global Corporate Citizenship Initiative in partnership with General Electric, Procter & Gamble and 3M, designed to create a national model for partnership opportunities between business and society emphasizing free enterprise and democratic principles.

In the mid 1980s, Dr. Tichy was head of GE’s Leadership Center, the fabled Crotonville, where he led the transformation to action learning at GE. Between 1985 – 1987, Dr. Tichy was Manager of Management Education for General Electric where he directed its worldwide development efforts at Crotonville. Prior to joining the Michigan faculty, he served for nine years on the Columbia University Business School faculty.

Professor Tichy is the author of numerous books and articles. His most recent book is JUDGMENT: How Winning Leaders Make Great Calls (Portfolio 2007, with Warren Bennis). He also authored THE ETHICAL CHALLENGE: How to Lead with Unyielding Integrity (Jossey-Bass 2003, with Andrew McGill), THE CYCLE OF LEADERSHIP: How Great Leaders Teach Their Companies to Win (Harper-Collins 2002, with Nancy Cardwell) and THE LEADERSHIP ENGINE: How Winning Companies Build Leaders at Every Level (with Eli Cohen), named one of the top 10 business books in 1997 by BusinessWeek. He is co-author of EVERY BUSINESS IS A GROWTH BUSINESS (with Ram Charan), published October 1998 (Random House). In addition, Tichy is also the co-author of CONTROL YOUR DESTINY OR SOMEONE ELSE WILL: How Jack Welch is Making General Electric the World’s Most Competitive Company (with Stratford Sherman). Tichy has long been regarded as a staple of management literacy as noted by his rating as one of the “Top 10 Management Gurus” by BUSINESSWEEK and BUSINESS 2.0. He has served on the editorial boards of the Academy of Management Review, Organizational Dynamics, Journal of Business Research, and Journal of Business Strategy and was the founding editor and chief of HUMAN RESOURCE MANAGEMENT.

Chris DeRose
Back to all webinars

A Team of Leaders