Unleashing Potential Through Secure Base Leadership 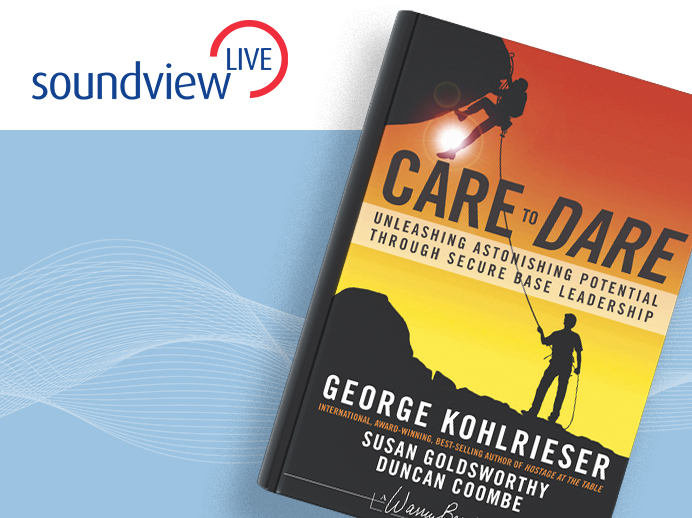 In this Soundview Live webinar, Unleashing Potential Through Secure Base Leadership, George Kohlrieser explains how becoming a secure base leader releases extraordinary potential in others and frees them from the fears that hold them back. From extensive interviews and surveys with executives from all over the world, Kohlrieser reveals the nine characteristics that Secure Base Leaders display on a daily basis. The Care to Dare concept will take you on a journey where you will discover your own secure bases, past and present, and determine how you can be a secure base for other people in your life at work and at home.

George Kohlrieser is an organizational and clinical psychologist. He is Professor of Leadership and Organizational Behavior and the creator and director of the flagship High Performance Leadership Program at one of the world’s leading business schools, IMD (International Institute for Management Development), located in Switzerland.

Incorporating the lessons he learned as a psychologist and hostage negotiator, George has worked with global companies and their leaders in over 100 countries. Additionally, he has worked with the police, the military and humanitarian organizations in such hot spots as Israel, the Palestinian territories and Croatia as well as with other police departments and police academies around the world. In the course of his work, he has been taken hostage four times–once in a hospital emergency room and three times in homes during domestic violence disputes.

Each time, using Secure Base Leadership skills, he successfully negotiated his way out. His first book, Hostage at the Table: How Leaders Can Overcome Conflict, Influence Others, and Raise Performance, was an international best seller which received the "Best Business Book Award 2007" from DCF (French Association of Business Leaders) and "Best Management Book 2008" in Germany from Managementbuch.de.

George is an engaging teacher and a highly sought after motivational speaker for conferences and keynote addresses, He had his own acclaimed radio call-in talk show, “Matters of the Mind,” for over a decade. He has been a guest on the BBC, CNN, ABC and CBS, and his work has been featured in the Wall Street Journal, the Economist and other leading newspapers and magazines. George has won numerous awards, including the prestigious BrandLaureate International Brand Personality Award.

How to Become a Leader for Life

What to Do When Your Good Idea is Not Enough

Select a shelf to add "Unleashing Potential Through Secure Base Leadership"