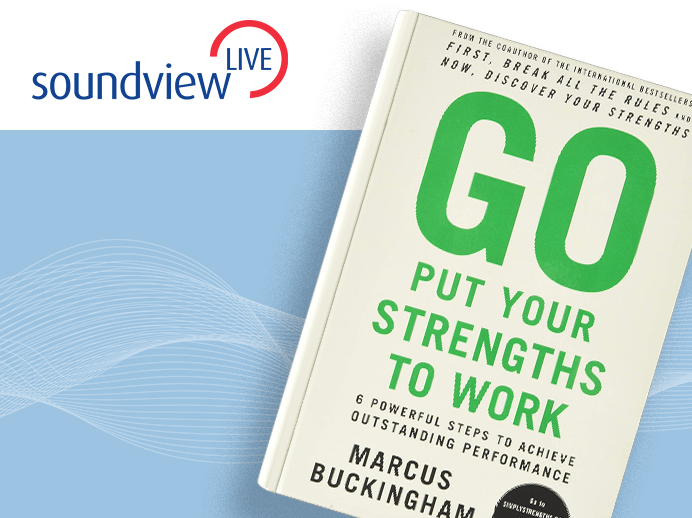 Following the million-copy bestsellers First Break All the Rules and Now, Discover Your Strengths, Marcus Buckingham’s Go Put Your Strengths to Work at last answers the ultimate question: How can you actually apply your strengths for maximum success at work?

Research data shows that most people do not make full use of their assets at work. This Soundview conference aims to change that through a six-step experience. The 6 Powerful Steps to Achieve Outstanding Performance will show you how to seize control of your assets and rewrite your job description under the nose of your boss.

With structured exercises that will become part of your regular work activities, and accounts of people who have successfully applied the book’s lessons, The 6 Powerful Steps to Achieve Outstanding Performance will arm you with a radically different approach to your work life.

The MP3 recording from this event as well as a book summary for Go Put Your Strengths to Work will be available to listen to or download from your Online Library immediately after check-out.

Marcus Buckingham is a British-American New York Times bestselling author, researcher, motivational speaker and business consultant best known for promoting what he calls “Strengths.” Basing most of his writing on extensive survey data from interviews with workers in countries around the world, he promotes the idea that people will get the best results by making the most of their strengths rather than by putting too much emphasis on weaknesses or perceived deficiencies.

Buckingham graduated from Cambridge University with a master’s degree in political science. While studying at Cambridge, he was recruited by educational psychology professor Donald O. Clifton, the founder of Selection Research, Incorporated (SRI). Clifton had co-founded SRI to develop interviews that would allow businesses to identify talents in individuals, in order to match people to the right roles.

SRI acquired The Gallup Organization in 1988, and took on the Gallup name. As part of Gallup, Buckingham became a member of a team working on a survey that measured a broad range of factors that contribute to employee engagement. Based on those surveys and on interviews with thousands of managers, Buckingham published (with coauthor Curt Coffman) First, Break All The Rules. According to its subtitle, the book describes “what the world’s greatest managers do differently” The book became a New York times bestseller and has over a million copies in print.

He went on to write other business best-sellers, including Go Put Your Strengths to Work, StandOut, and Nine Lies About Work.

A Game Plan for Rebounding in Life

The Secret of World-Class Performers

Writing Without Bullshit: How to Boost Your Career by Saying What You Mean