Reinvent Your Company to Survive 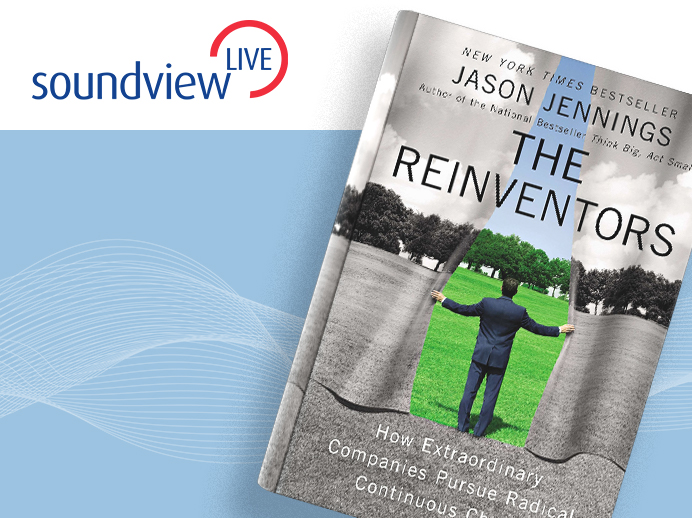 An astounding 98% of CEO’s believe their current business models are ultimately unsustainable. Innovation is not enough to take these companies into the future. They need reinvention — a top to bottom ruthless review and rebuild of the organization asking and answering the hardest of questions.

In this Soundview Live webinar, Reinvent Your Company to Survive, Jason Jennings uses his research of 120,000 companies to provide 10 rules for reinvention, to help viewers move toward a continuous change model.

Jason Jennings is a researcher and one of the most successful and prolific business and leadership authors in the world and his greatest thrill is helping lead individuals and companies to their full economic potential.

He began his career as a radio and television reporter and was the youngest radio station group owner in the nation. Later, he founded Jennings-McGlothlin & Company, a consulting firm that became the world’s largest media consultancy and his legendary programming and sales strategies are credited with revolutionizing many parts of the broadcasting industry.

Critics call his books, “extraordinarily well researched, insightful, crisply written, accessible, intriguing and a vital resource for everyone in business,” and USA TODAY calls Jennings one of the three most in-demand business speakers on the planet along with the authors of Good to Great and In Search of Excellence.

How to Create Urgency & Growth in a Nanosecond Culture

Select a shelf to add "Reinvent Your Company to Survive"