How to Turn Customers from Detractors into Advocates 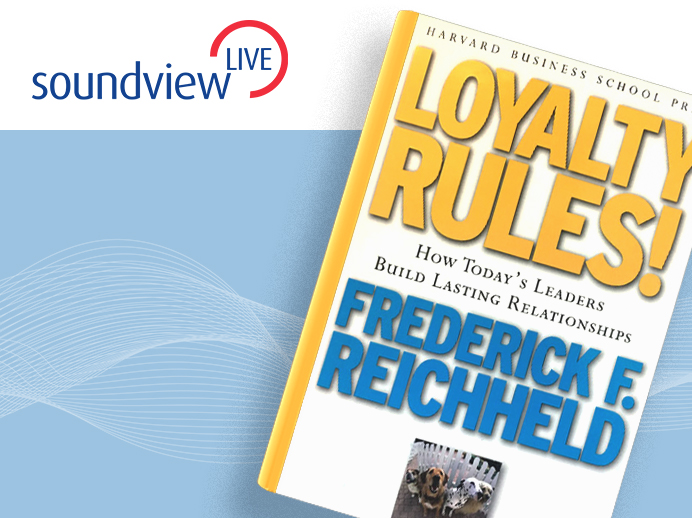 Loyalty expert Fred Reichheld explains how to turn customers into promoters who generate good profits and true, sustainable growth. The key: one simple question that tracks promoters and detractors and produces a clear, easy-to-understand measure of an organization’s performance in its customers’ eyes. A Bain & Company analysis shows that sustained value creators — companies that achieve long-term profitable growth — have Net Promoter Scores two times higher than the average company. And NPS (SM) leaders outgrow their competitors in most industries — by an average of 2.5 times.

"The Ultimate Question: How likely is it that you would recommend this company to a friend or colleague?"

Based on extensive research, The Ultimate Question shows how companies can rigorously measure Net Promoter statistics, help managers learn to improve them, and create communities of passionate advocates that stimulate innovation.

The MP3 recording and slides from this event as well as a book summary for Loyalty Rules! will be available to listen to or download from your Online Library immediately after check-out.

Frederick F. Reichheld (born 1952, Cleveland) is a United States business author and business strategist best known for his research and writing on the loyalty business model and Loyalty Marketing. His books include The Loyalty Effect (1996), Loyalty Rules! (2001), and The Ultimate Question: Driving Good Profits and True Growth (2006). He has also authored articles for business publications such as Harvard Business Review. He speaks on loyalty and other business topics at management conferences and similar events.[1]

Reichheld is a Fellow of the management consultancy Bain & Company, where he has worked since 1977. In 2003, Consulting Magazine named him one of the world’s top 25 consultants.[2] The Economist magazine called him "the high priest of the loyalty cult" in 2001.[3]

His most recent book, The Ultimate Question, focuses on Net Promoter Score (NPS), a concept he developed based on his research in measuring customer satisfaction, customer retention and its link to revenue growth and profitability. This metric serves as an indicator of the loyalty and advocacy customers show for a company.

The Key to Driving a High-Performance Culture

You Too Can Lead

How to Lead (Not Just Manage) Your Remote Team