How to Capture New Markets 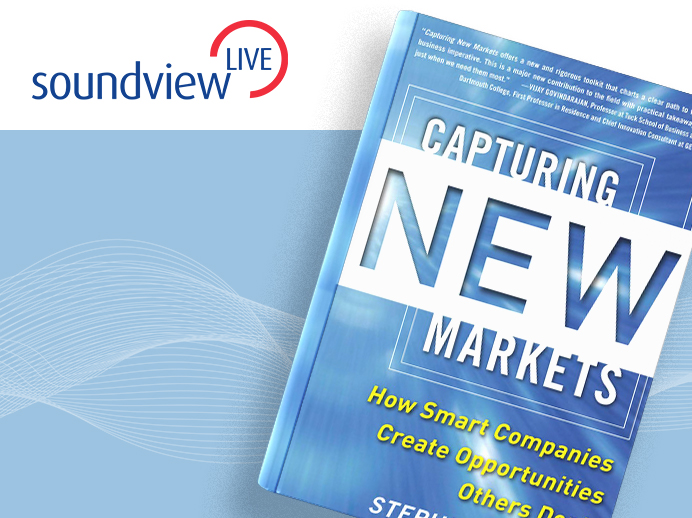 In this Soundview Live webinar, How to Capture New Markets, world-renowned business strategist Stephen Wunker guides you through the process of creating counter-intuitive strategies that will lead to success in capturing new markets, such as treating competitors as collaborators, timing market entry and targeting narrow niches before big customer segments.

Wunker’s experiences with Celtel BV of India, Ericsson’s launch of the Psion, and the founding of Saverfone, plus his groundbreaking work with Clayton Christensen, provide a rich source of observations and principles from which he can guide you to turn new markets into drivers of growth for your company.

The audio recording, video recording, slides, and a summary of Capturing New Markets will be available to listen to or download from your Online Library immediately after check-out.

As a specialist in new markets, Stephen Wunker combines world-class strategy consulting and entrepreneurial skills. He is the author of Capturing New Markets: How Smart Companies Create Opportunities Others Don’t (McGraw-Hill, 2011). Steve has a long track record of creating successful ventures for his own companies and on behalf of clients.

In addition to his entrepreneurial and corporate venturing experience, Steve was a long-term colleague of Harvard Business School Professor Clayton Christensen in building up his innovation consulting practice. Since 2009, he has led New Markets Advisors, which is dedicated to helping companies find new sources of growth and build innovation capabilities.

Before his entrepreneurial career, Steve was a strategy consultant for several years at Bain and Company, in both their Boston and London offices. He also worked to establish George Soros’ philanthropies in Czechoslovakia after the end of communism, and he assisted the Rockefeller Brothers Fund with their pioneering efforts in developing an environmental movement in Eastern Europe.

Innovation That Gives Your Customers Exactly What They Want

Meetings That Get Results

Select a shelf to add "How to Capture New Markets"