Innovation That Gives Your Customers Exactly What They Want 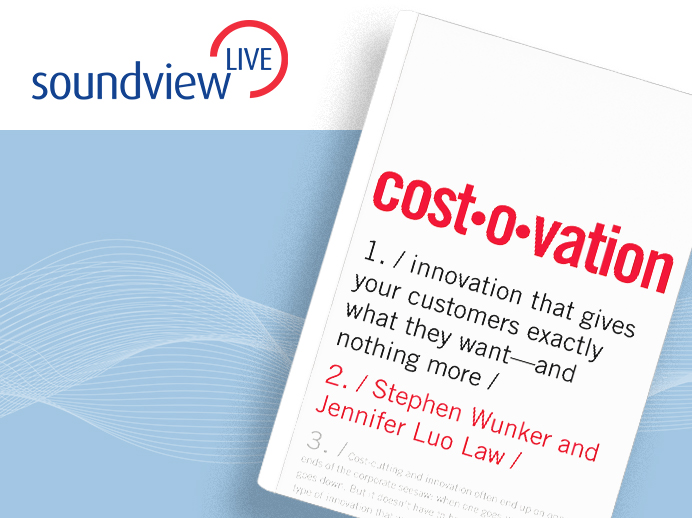 Cut costs is a common corporate refrain. But if you constantly slash expenditures, what happens to innovation? How can you stay competitive and satisfy customers?

Costovation solves the dilemma of how to spend less and innovate more. The book’s revolutionary approach broadens the definition of innovation beyond products to the business model itself. In this Soundview Live webinar, Wunker and Law will show you how costovation allows you to let go of assumptions, take a fresh look at the market, and relentlessly focus on what customers really want.

As a specialist in new markets, Stephen Wunker combines world-class strategy consulting and entrepreneurial skills. He is the author of Capturing New Markets: How Smart Companies Create Opportunities Others Don’t (McGraw-Hill, 2011). Steve has a long track record of creating successful ventures for his own companies and on behalf of clients.

In addition to his entrepreneurial and corporate venturing experience, Steve was a long-term colleague of Harvard Business School Professor Clayton Christensen in building up his innovation consulting practice. Since 2009, he has led New Markets Advisors, which is dedicated to helping companies find new sources of growth and build innovation capabilities.

Before his entrepreneurial career, Steve was a strategy consultant for several years at Bain and Company, in both their Boston and London offices. He also worked to establish George Soros’ philanthropies in Czechoslovakia after the end of communism, and he assisted the Rockefeller Brothers Fund with their pioneering efforts in developing an environmental movement in Eastern Europe.

How to Build a Culture for Market Dominance

How to Thrive in the Era of Endless Innovation

How to Lead & Inspire Creative Breakthroughs