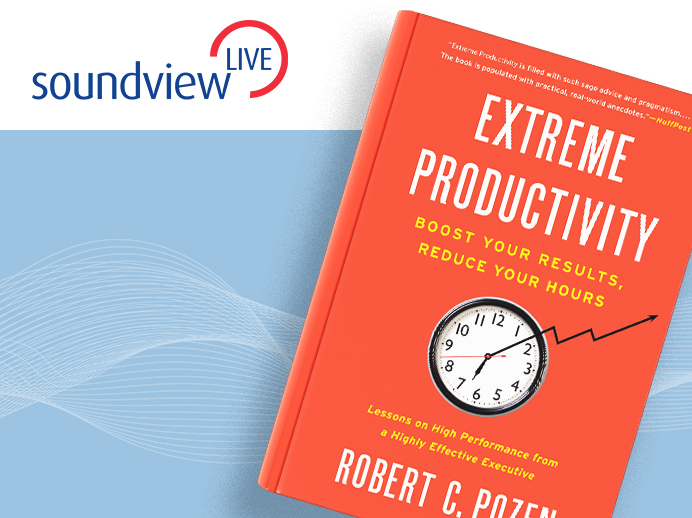 In this Soundview Live webinar, Extreme Productivity, Robert C. Pozen reveals his secrets to workplace productivity and high performance. The antidote to a calendar full of boring meetings and a backlog of emails, this webinar shows professionals how they can achieve their goals by making a critical shift in mindset: from hours worked to results produced.

Robert C. Pozen was formerly Chairman of MFS Investment Management®, which manages over $300 billion in assets for over five million investors worldwide.  This represents an increase of more than 100% from the beginning of 2004, when Bob was named Chairman.  He serves as a Senior Lecturer at the Harvard Business School and a Senior Research Fellow at the Brookings Institution.

In late 2001 and 2002, Bob was a member of President Bush’s Commission to Strengthen Social Security. He later developed a progressive plan for reducing by half the long-term deficit of Social Security — slowing the benefit growth for high earners, while preserving the benefit schedule for low earners. His plan was endorsed by President Bush, and was included in a series of memoranda to President Obama from the Progressive Policy Institute (eds. W. Marshall and M.Ribbing, January 2009).  His plan was more recently endorsed by the editorial boards of both the Wall Street Journal and the Washington Post.
In 2003, Bob served as Secretary of Economic Affairs for Massachusetts Governor Mitt Romney. He helped the Governor close the state’s large budget gap and reorganize its functions in business and technology, labor and workforce training and consumer affairs. In addition, he supervised the banking and insurance departments.

Bob was formerly Vice Chairman of Fidelity Investments and President of Fidelity Management & Research Company, the investment advisor to the Fidelity mutual funds. During Bob’s five years as President, Fidelity’s assets increased from $500 billion to $900 billion. From 1987 to 1996, Bob was Managing Director and General Counsel of Fidelity Investments.  In that role, he created Fidelity’s Charitable Gift Fund, launched Fidelity’s entry into the Japanese mutual fund business, and served as a director of its credit card bank.
In 1968, Bob graduated summa cum laude and Phi Beta Kappa from Harvard College, which awarded him a Knox Traveling Fellowship. In 1972 Bob received a law degree from Yale Law School, where he served on the editorial board of the Yale Law Journal.  In 1973, he received a JSD from Yale for his doctoral thesis on state enterprises in Africa.

Bob is an outside director of Medtronic, Inc, and Nielsen, Inc. He is also an outside director of several funds managed by AMC, a subsidiary of the World Bank investing in Africa and Latin America. In addition, he is a member of the governing board of two non-profit organizations, the Harvard Neuro-Discovery Center and the Commonwealth Fund.  He is a fellow of the American Academy of Arts and Sciences and a member of the Council on Foreign Relations.

What Makes the Great Teams Great

The 4 Steps to Breakthrough Communication

How to Beat the 8 Ego Traps that Derail Careers