Boosting Your Value at Work 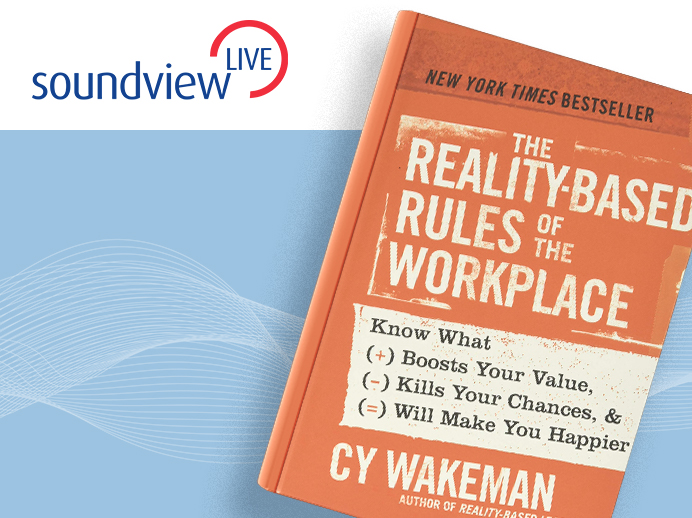 What does it take to become valued and appreciated at the office? In this Soundview Live webinar, Boosting Your Value at Work, Cy Wakeman reveals a formula for understanding how your manager calculates your value to the organization. Based on research with more than 50,000 people, this formula will measure your current performance, your future potential, and your "emotional expense" to those around you. Wakeman then shows you how to boost your value, own your career, and become irreplaceable to your organization.

Cy Wakeman is a dynamic national keynote speaker, business consultant, New York Times bestselling author, and trainer who has spent over 20 years cultivating a revolutionary approach to leadership. Grounded in reality, Wakeman’s philosophy teaches people how to turn excuses into results and transform unhappy employees into accountable, successful members of the workforce. Through her prolific work with companies such as Bayer, New York Presbyterian, National Institutes of Health, Hallmark, Verizon Wireless, TD Ameritrade, and Wells Fargo, Wakeman has helped eliminate tired, impersonal management techniques in favor of a reality-based revolution.

Wakeman’s professional journey began when she was promoted to her first management position in the late 1980’s. Rather than forcing ineffective, traditional management practices into her workplace, Wakeman began developing and teaching her employees a reality-based mindset. What she found was inspiring – her employees were not only motivated to succeed, but they were also driven to deliver results, adapt to change, and emanate happiness on the job. Inspired to help others transform their company and their work, Wakeman began consulting and training. Today, she visits more than 200 companies each year, empowering employees and executives alike to take control of and invest in their work.

An expert blogger on FastCompany.com and Forbes.com, Wakeman’s ideas have been featured in The Wall Street Journal, The New York Times, The New York Post, and on SHRM.com. She has written two books, Reality-Based Leadership: Ditch the Drama, Restore Sanity to the Workplace, & Turn Excuses into Results (Jossey-Bass; 2010) and The Reality-Based Rules of the Workplace: Know What Boosts Your Value, Kills Your Chances, & Will Make You Happier (Jossey-Bass; 2013).

Tools to Save Time and Get Things Done

Select a shelf to add "Boosting Your Value at Work"