As co-founder and CEO of Globoforce, Eric has been directing the path of Globoforce as the innovator in the recognition industry since the company’s beginning. His vision to raise employee recognition from a tactical, unmeasured, and under-valued effort to a global strategic program with clear measures for performance and success is now being realized in some of the world’s largest and most complex organizations. Eric’s work has been published in such publications as Harvard Business Review, Fast Company, Forbes, and Fortune, and he has also presented at industry and investment conferences around the world. He is the author of The Crowdsourced Performance Review and the co-author of the critically-acclaimed books Winning with a Culture of Recognition and The Power of Thanks.

Prior to joining Globoforce, Eric established himself as an accomplished Internet consultant and architect having held varied management and technology roles in CSK Software, Bull Cara Group and Logica Aldiscon. He holds a bachelor’s degree in Electronics, Computers and Telecommunications Engineering from the University of Dublin, Trinity College. 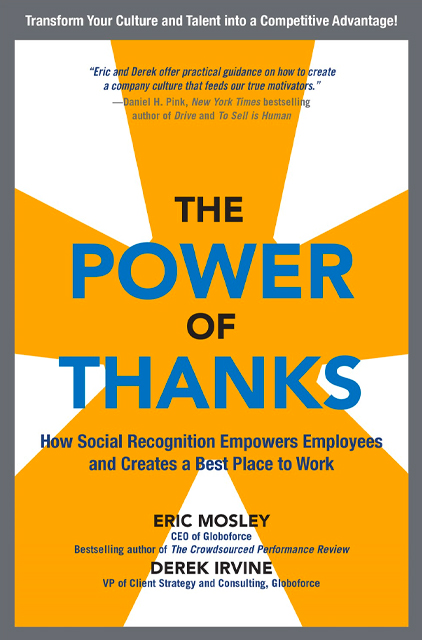 The Power of Thanks Eric Mosley, Derek Irvine