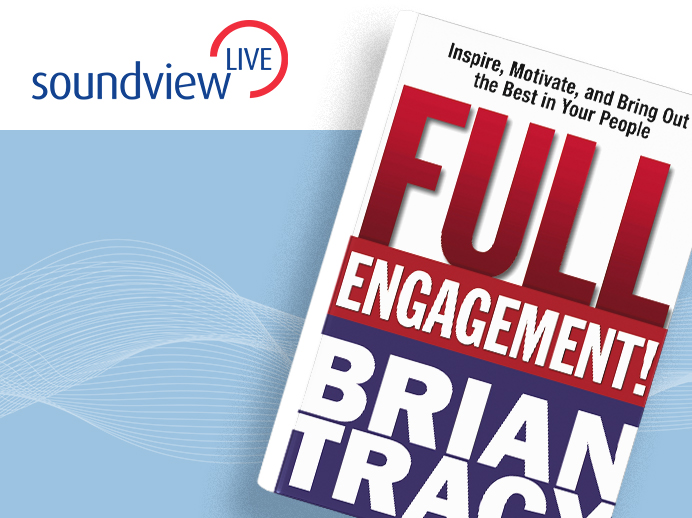 Studies have shown that on average, employees are working at only a fraction of their potential. What are managers to do? How can they inspire their people to perform at their absolute best?

In this Soundview Live webinar, Unlocking Superstar Performance, business success expert Brian Tracy shows managers how they can supercharge their employees’ efforts. Whatever the situation, a good manager can quickly organize a group of average performers into a high-functioning team capable of achieving tremendous results for the company. The secret is knowing how, and Tracy has the answers.

The audio recording, slides and the summary of Full Engagement! will be available to listen to or download from your Online Library immediately after check-out.

Brian Tracy is Chairman and CEO of Brian Tracy International, a company specializing in the training and development of individuals and organizations.

Brian Tracy has consulted for more than 10,000 companies and addressed more than 5,000,000 people in 5,000 talks and seminars throughout the US, Canada and 55 other countries worldwide. As a Keynote speaker and seminar leader, he addresses more than 250,000 people each year.

He has studied, researched, written and spoken for 30 years in the fields of economics, history, business, philosophy and psychology. He is the top selling author of over 45 books that have been translated into dozens of languages. He has written and produced more than 300 audio and video learning programs, including the worldwide, best-selling Psychology of Achievement, which has been translated into more than 20 languages.

He speaks to corporate and public audiences on the subjects of Personal and Professional Development, including the executives and staff of many of America’s largest corporations. His exciting talks and seminars on Leadership, Selling, Self-Esteem, Goals, Strategy, Creativity and Success Psychology bring about immediate changes and long-term results.

Prior to founding his company, Brian Tracy International, Brian was the Chief Operating Officer of a $265 million dollar development company. He has had successful careers in sales and marketing, investments, real estate development and syndication, importation, distribution and management consulting. He has conducted high level consulting assignments with several billion-dollar plus corporations in strategic planning and organizational development.

He has traveled and worked in over 80 countries on six continents, and speaks four languages. Brian is happily married and has four children. He is active in community and national affairs, and is the President of three companies headquartered in Solana Beach, California.

7 Ways to Maximize Your Profits

Executives: Achieve Everything You Want – Faster Than Ever!

Getting Through to Absolutely Anyone