A New Model for Thinking About Large Meetings 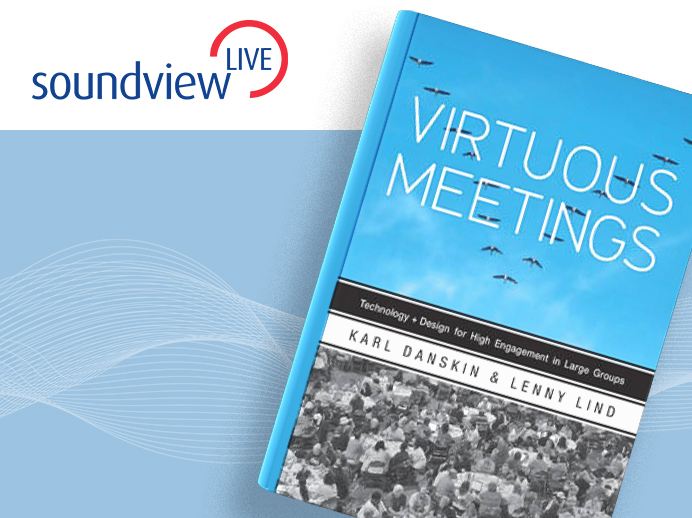 In this Soundview Live webinar, A New Model for Thinking About Large Meetings, Karl Danskin and Lenny Lind take you inside the new world of interactive large group meetings. In business, in government, in international forums, participants are being given an exciting new role in generating group solutions and understanding. With the integration of communications technology into face-to-face meetings, every participant now has a “voice” in the meeting – the ability to actually participate! Active co-creation is replacing the old model of one-way presentations and top-down decisions.

Since the early 1990s, Karl Danskin has focused on developing the means for participants in large meetings to transition from passive audience to active contributors. He has worked on the design of hundreds of large organizational meetings throughout Europe and the United States. Concurrently, Danskin has been part of the core team of Covision. He has taken a leading role in the “project” of developing the Virtuous Meeting method and promoting its usage. He is currently head of Strategy and Thought Leadership at Covision.

Lenny Lind is founder and chairman of Covision and a senior consultant. Lind has been involved with organizational communications—media and processes—particularly in large meetings, since 1975. In 1985, he cofounded Covision as a video production company, specializing in videos with organization development purposes and designed to make people think. These videos were often shown at large meetings.

In 1991 Lind discovered early attempts at software for facilitating better meetings. Soon after, Lind partnered with Jim Ewing of Executive Arts and began developing software that enabled real whole group dialogue and understanding in meetings. Within a year, Covision shifted out of video production altogether and into supporting interactive meetings.