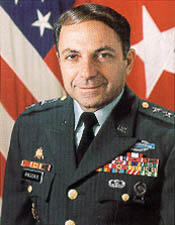 Lieutenant General William Gus Pagonis was the director of Logistics during the Gulf War of 1991 and is widely recognized for his logistical achievements particularly during Desert Storm. After successfully masterminding logistics for the Gulf War and winning high praise from General Norman Schwarzkopf, Pagonis left the Army in 1993 and was elected Executive Vice President of Logistics for Sears Roebuck & Co. In 2000 he joined Railamerica, Inc.