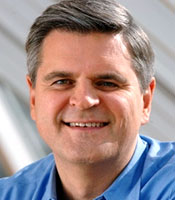 One of America’s most successful entrepreneurs and executives, best-known as co-founder of America Online and CEO of Revolution LLC, Steve Case has a passion for building startups that can change the world.

Steve’s entrepreneurial career began in 1985 when he cofounded America Online. Under Steve’s leadership AOL drove the worldwide adoption of a medium that has transformed business and society. AOL handled nearly half of all internet traffic at its peak, was the first ever Internet IPO, and was the top performing company of the 1990s. In 2000, Steve negotiated the largest merger in business history, bringing together AOL and Time Warner in a transaction that gave AOL shareholders a majority stake in the combined company. To facilitate the merger, Steve agreed to step down as CEO when the merger closed.

As chairman and CEO of Revolution, an Washington, DC-based investment firm he cofounded in 2005, Case partners with visionary entrepreneurs to build businesses such as Zipcar and Sweetgreen, and many others.

Steve has been a leading voice in shaping government policy on issues related to entrepreneurship, working across the aisle to advance public policies that expand access to capital and talent. He is also Chairman of the Case Foundation, which he established with his wife Jean in 1997. Together the Cases have invested in hundreds of organizations, initiatives and partnerships with a focus on leveraging the internet and entrepreneurial approaches to strengthen the social sector. In 2010, Steve and Jean joined The Giving Pledge and publicly reaffirmed their commitment to give away the majority of their wealth to philanthropic causes.

Steve was born and raised in Hawaii and retains active ties to his home state, but has lived in the Washington D.C. area for more than 25 years.